This pair of M2 clone cicuit boards, use the same circuit as the Nelson Pass / First Watt M2 amplifier. However, the first "buffer" stage of amplification has been placed on a removable daughter board, making it extremely easy to swap-in different first stage circuits. A total of five first stage circuit designs are provided, and naturally one of them is the Nelson Pass / First Watt original.

The product package consists of twelve PCBs: two amplifier main boards, and five stereo pairs of daughter boards. Read the M2X thread on diyAudio to learn more and join in the discussion.

The M2x is a Push-Pull Class A amplifier circuit, with zero global feedback. It consists of 3 stages: an input buffer circuit (on a daughter card), followed by a passive auto-transformer for voltage gain, and finally a Class A MOSFET push pull output buffer. The sound of the M2x, as Nelson Pass puts it, is "relaxed and lively."

These different input circuit designs allow a builder many options, particularly when sourcing electronic components. For example, during times when the JFETs used in Nelson Pass's original (K170 + J74) are out of stock, one of the other daughter cards can be sourced, stuffed, soldered, and enjoyed in the listening room. Some early M2x builders report that they prefer the sound of these other cards, even more than the Nelson Pass original. Try them yourself and discover which one(s) YOU prefer.

ISHIKAWA (using Toshiba or LS JFETs) has the absolutely lowest parts count and is the easiest to solder together. But those FETs are hard to find.

TUCSON using the thru-hole OPA604 chip, is the lowest parts count board that doesn't use unobtainium devices. And the OPA604 opamp has JFET inputs, so if you love JFETs, it's one of the opamps you probably know and adore. Alternatively, TUCSON using the SMD OPA1611 chip, is the lowest distortion input stage of them all. Even lower than the Nelson Pass original. It only has one surface mount part; the rest of the board is thru-hole.

NORWOOD is all-SMD, just like the entire electronics industry has been for the last 20 years. Norwood includes a 200 mA driver IC, and a JFET input opamp from Analog Devices. Its output current capability is at least a factor of five greater than any of the other M2x input stages. If you're at all concerned about the input impedance of the output devices at HF, reflected from the transformer secondary back into the primary, Norwood can drive it better than all the others.

MOUNTAIN VIEW uses single-ended, class A, discrete circuitry and no feedback. If you are a big believer in single ended class A, if you love this quote from a famous article by Nelson Pass...

"For reproducing music as naturally as possible, push-pull operation is not the best approach. Air is not symmetric and does not have a push-pull characteristic. ... Only one linear circuit topology delivers the appropriate characteristic, and that is the single-ended amplifier. Single ended amplification only comes in pure class A,"

...then you probably are interested in listening to the Mountain View input stage.

AUSTIN is a thru-hole board with 4X more components than the other boards; its resistors are mounted vertically to save PCB area. This permits a Diamond Buffer circuit with high performance, precision current source loads. Builders who love parts substitutions / optimizations will appreciate that Austin's PCB silkscreen doesn't indicate transistor orientation. Instead, transistor pins are labeled B, C, E in a perfect circle; allowing you to drop in Japanese 2SA/2SC transistors (pinout ECB) or European BC transistors (pinout CBE) or American 2N transistors (pinout EBC) however you please. Austin is recommended ONLY for experienced builders. If you're a newbie, hire someone to solder your Austin board!!

As with most First Watt amplifiers, the power output is 25WPC into 8 ohms.

I've built the Aleph J and F6 prior to the M2x. Each time, the boards were top quality. The build guides and member assistance from the forum are just fantastic. The M2x is my favorite of the 3, so far having only tried the Ishikawa input stage. In fact, it's the best sounding amp I've ever had. 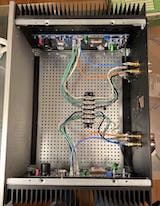 Great boards. I made a mistake in the assembly. Removal and rework of the part caused absolutly no damage to the board. Many cheap boards would not have fared so well.

My M2X is still in progress. So I can`t tell you how the different input boards affect the sound.
PCBs are very good quality (as always!). Delivery was very fast. But customs take their time
(it was around christmas time!).

I am very pleased with the possibilities to change the input boards. Nice toy to play with.
Unusually I got the EDCOR-transformers first, then the pcbs, and still waiting for some
other parts.
Thanks to
Nelson Pass, Mark Johnson, 6L6 and all other involved persons...

Arrived in perfect order. Boards well
Made. Have not had a chance to start work as yet.

These boards are fine by themselves and represent a rare opportunity for DIYers: take advantage of a superb Pass design that has been augmented by Johnson's fine daughterboard concept. Great stuff all around.
The problems anyone will have are related to the difficulty of obtaining certain parts. The trimpot is currently backordered everywhere and a substitute must be tried. Fortunately, Edcor is making the transformers available and this company is pleasant to deal with.
What is needed is the flexibility to order one or another board individually. Problems can occur and when a board is ruined, an entire set must be purchased just to replenish that one ruined board.
Those of us that have taken advantage of the M2x thread, with OP Johnson, know how helpful this crew is. An exceptional group of fine professionals helping folks they don't even know -- KUDOs, DIYers!

Boards are standard DIYAudiostore boards, they are excellent quality. The amp is exceptional! It is one of the best sounding i have had the pleasure of listening to in my room with my system.

Exceptional amplifier in every regard. I especially like the ability to swap front ends. This allowed me to take my system to the next level.