This is the Analog Crossover Network: Basic Kit. To purchase a complete kit or learn more about what the ACN can do for you visit ACN Complete Kit page.

Great kit. Easy to put together. Works great with my vinyl player.

The ACN-basic-kit is a very good package! Super PCB, well matched JFets.
I want to use it as an active 2-way-crossover for my speaker build (not for
the LXmini). All resistors/caps will be changed in the Sallen-Key-filters.
A more universal ACN-Kit (as mentioned from Nelson Pass) could be very
interesting.

The new DIY-audio-shop is doing a fantastic job! Very fast delivery from the USA
to Germany (below 12 days - including customs).
Well packed and always good infos by email.
Thanks to DIYaudio-team!
Dirk Hoerrmann, Germany 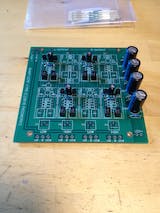 very nice layout which allows for customization - in my case to build a crossover to go with a Pass SLOB open baffle speaker with a full range driver augmented with a slot-loaded woofer. The crossover allows for a bi-amp arrangement with level and crossover slope matching, as well as tailored EQ for each driver. I am combining this board with a NuTube board for gain. Should make a great combo.

Finaly I received the parts, the German DHL did a bad job and resend the items to USA where they get lost. But diyaudiostore shipped the parts for free, they charged only the shipping. Thanks a lot! Great stuff, now I am fiddling to find the best crossover points for my Speakers.

B
B.M.
Replaced an op-amp based crossover and parametric equalizer

Using LTspice, I was able to redesign the notch filter so that it was narrower and not as deep and centred at 2 kHz. No modifications were required to the circuit board, although jumpers were added and components changed. LTspice was also handy in recalculating the crossover component values to get a 800 Hz crossover frequency and to modify the bass equalization. Frequency response tests after building confirmed that the design was accurate.

This crossover does the job with minimal circuitry and can be modified to suit users' needs, which was what I was looking for. So, it can work for speakers other than the LX Mini. Pretty hard to beat for the price, too.

Works as advertised for my LXmini kit from magicLX521. Shipping was fast and parcel arrived (with tax and customs fees added) in Germany. Even in its current state with a cardbox enclosure produces no audible noise. Note that the chepest ebay power supplies from China are a bit noisy but with a brand name power supply (the triad recommended is not available in Europe) it is quiet.

Great kit, well put together. A must buy while it last. Very recommended...

As advertised...really cool that Mr. Pass would do this for the LX Mini crowd (and Mr. Linkwitz, RIP). Fun project, everything checked out and worked on first go, and sounds great. I may be hooked. Thinking about building another before golf season returns so that I can try with XLR, even if it's not particularly cost effective. Anyone need a miniDSP?